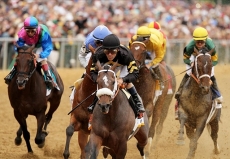 For those looking for a reason to play against Nyquist in the Preakness Stakes May 21 at Pimlico, there’s a lot of recent history to support the plausibility of such a notion.

Since 2005, 7 of the 11 Preakness winners were able to knock off the Kentucky Derby champ two weeks later in the Preakness. All but two of those starters – Bernardini in 2006 and Rachel Alexandra in 2009 – competed in the Kentucky Derby and were able to avenge losses with a Preakness win. Big Brown, I’ll Have Another, California Chrome and American Pharoah represent the only colts able to pull off the Derby/Preakness double in the last 11 years.

So what do any of these facts have to do with the 2016 Preakness? If nothing else, Derby winners are frequently beaten by Derby also-rans in the Preakness. There’s also the reality that the betting public has shown a propensity to overbet the Derby winner in the Preakness. Derby winners Orb (2013), Animal Kingdom (2011) and Street Sense (2007) were short-priced favorites in the Preakness who had each distanced their returning Derby rivals by safe margins just two weeks before. Oxbow, eighth in the Derby, was able to turn the tables on Orb who never fired in the 2013 Preakness, and Shackleford (fourth in the Derby) was able to hold off Animal Kingdom’s late charge. The lightly-raced Curlin (third in the Derby) came back with a vengeance to out-game Street Sense.

Nyquist has beaten his closest Derby contender Exaggerator four times – a well-documented fact that has become a narrative in the mainstream media. The Derby champ also ran effortlessly by Gun Runner in the stretch as that rival tired to finish third. It would be easy to watch the replay of the 2016 Kentucky Derby and assume that neither pose a serious threat to Nyquist in the Preakness, but that would also prove a foolish supposition as recent history suggests.