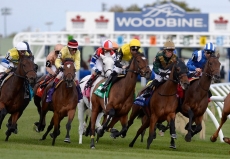 The crown jewel of the season at Woodbine Racetrack in Toronto, Canada is the $1 million Queen's Plate. The 1 1/4-mile horse race for three-year-olds bred in Canada often has a large and competitive field with fillies and colts doing equally well. The race is famous for its pageantry and big payouts.

The best way to bet the 2020 Queen's Plate, especially as there will be no fans allowed due to COVID-19 and no one can be on track to enjoy the event, is by using an online sportsbook. Select the one with the best odds and bonuses when you sign up. The Queen's Plate is just one of the many major events worth betting in horse racing. Every weekend there are major races around the world with big betting pools and payouts.

Clayton has been a highly regarded colt all year. Kevin Attard trains the son of Bodemeister, who has won three of four starts and won the Plate Trial last out. His lone loss came over seven furlongs and after a seven-month layoff. Clayton has speed figures higher than anyone in the field save for the filly Curlin's Voyage.

Curlin's Voyage is the likely favorite off a big victory in the $500,000 Woodbine Oaks on August 15. The daughter of Curlin is trained by popular trainer Josie Carroll, and she ran faster than the colts - including Clayton - in the Plate Trial on the same card. She also won the Fury Stakes and was Canada's Champion Two-Year-Old Filly of 2019 with wins in races like the Mazarine and Princess Elizabeth. Patrick Husbands will ride.

In 2019, trainer Steve Asmussen won two legs of the Canadian Triple Crown with Tone Broke. Halo Again is his 2020 representative. The son of Speightstown was a narrow second in the Plate Trial but last year won the Coronation Futurity. He seeks to become the first horse to win the Queen's Plate after winning the Futurity since 1976.

Holyfield is very popular at Woodbine for missing part of an ear. Catherine Day Phillips trains the son of Uncle Mo, who finally broke his maiden last out August 22 in his sixth start under Emma Jayne Wilson. He has improved this year since stretching out past a mile.

Third behind Curlin's Voyage in the Woodbine Oaks was Merveilleux. The daughter of Paynter won her 2020 debut, and Kevin Attard would love to get his first Queen's Plate. So too would Sid Attard, with Olliemyboy, a longshot. The son of Union Rags is coming off a win in a maiden race over nine furlongs. Dotted Line was third in the Plate Trial. He is another Attard trainee and is three for eight over the track. Unlike many of the runners in here, he is graded stakes placed. He was a top juvenile, winning the Kingarvie and the Frost King.

Sweepin Hard is lightly raced, but the son of Conquest Curlinate jumps in after breaking his maiden at the $40,000 claiming level last out. Dan Vella trains the gelding, who improved going from sprinting to routing last out.

Tecumseh's War is another Day Phillips trainee. He broke his maiden first out last year like a good thing, then has struggled to win since, but he missed by just a half-length last out and finished ahead of fellow Plate starter Mighty Heart.

The favorites look hard to beat in the 2020 Queen's Plate, so picking a few longshots to round out the trifecta and other exotic wagers will help make it a profitable race to bet.

Jockeys that have shipped in to ride and are not Woodbine regulars have taken the last two Queen's Plates, and three of the last four. Although COVID-19 rules may alter any travel plans, especially crossing into the Canadian border which is close, pay attention to jockeys that ship into Woodbine to ride when they don't normally.

This is the year for local jockeys to shine. Rafael Hernandez last won the Queen's Plate in 2015 aboard Shaman Ghost. Luis Contreras has won it twice, both times on fillies. Emma Jayne-Wilson hasn't won it since 2007, and Patrick Husbands since 2014. These are all brilliant active jockeys who will be vying to win the Plate in 2020.

One of the biggest payouts can be found in the Queen's Plate trifecta wager. This means picking the top three horses, either straight - or in order - or boxed, meaning they can finish in any order. A boxed wager is more expensive, but also much more likely to hit.

For added coverage, throw in Mervielleux

The expected field for the 2020 Queen's Plate, which will have official odds and post positions announced on September 9, is: