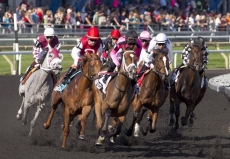 A field of 12 colts and one filly have drawn into the 157th Queen's Plate, including recent Plate Trial Stakes winner Amis Gizmo, the morning line favorite at 3-1, and one of two entered by trainer Josie Carroll. The two-time Plate winner also has the filly Gamble's Ghost (6-1), a late-runner who will break from the outside post.

Favorite has been almost unbeatable

Prior to winning the Plate Trial, Amis Gizmo finished fifth in the Wando Stakes, his first defeat in five lifetime starts, all at Woodbine in stakes races. In the Trial, he settled early near the back of the six-horse field, but took command with a strong move at the top of the stretch and won driving by more than 2 lengths. The colt he outfinished in Shakhimat (5-1), was the beaten favorite, and is back here as well, as is third-place finisher Sir Dudely Digges (15-1). The former won last season's Coronation Futurity at Woodbine, and has a Grade 3 stakes win at Keeneland among his three lifetime wins from six starts.

Other starters are in with a shot

Getting second choice in the ML at 7-2 is 2015 Breeders' Cup-winning trainer Mark Casse's Leavem In Malibu, who was unraced as a juvenile and will be making only his fourth lifetime start. He has won his last two, most recently going up against older horses and overcoming trip problems to win by almost three lengths going 1 1/16 miles in an upper-level allowance race at Woodbine. As for the filly, she was beaten a nose as the favorite last out in the Woodbine Oaks, but has been first or second in all six of her Woodbine starts, with a pair of graded-stakes wins, in times that make her legitimate with these colts.