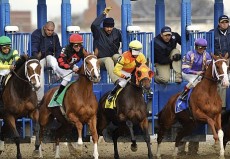 The stakes action continues at Belmont Park on Sunday with the first running of the $100,000 Sky Beauty Stakes. Scheduled to be run at one mile and restricted to fillies and mares who have not won a graded stakes this year, the race has drawn a field of five.

The morning line favorite at odds of 7-5 is Katie’s Garden who will break from the outside post under John Velazquez. The four-year-old filly is a homebred for Ann and Jerry Moss by Elusive Quality and out of their Grade 1 winning mare, Tarlow. Trained by John Shirreffs, she will be making her stakes debut after winning her last three races. She has won three of her five total starts and was last seen winning an optional claiming race at Saratoga.

Second choice at odds of 8-5 on the morning line is Montana Native for trainer Christophe Clement. A multiple stakes winner for owner Castleton Lyons, the four-year-old daughter of Yes It’s True has been on the board in four of her five starts this year including a win in the Winter Melody Stakes. She was second in the Molly Pitcher (G2) in her most recent effort and will have Joel Rosario in the irons. The pair will break from post position three.

Also in the field at odds of 7-2 is Ponderway for trainer Tom Albertrani and West Point Thoroughbreds. Purchased for $175,000 as a juvenile, the chestnut daughter of Congrats has won four of her twenty career starts including the Dream Rush stakes as well as placed in several graded stakes. She is switching back to conventional dirt after competing on the synthetic surface at Woodbine in her recent starts and will have Javier Castellano aboard from post position four.