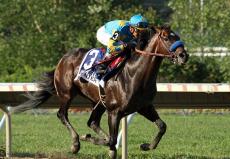 Eleven two-year-olds are set to compete in the 109th running of the Grade 2 Saratoga Special. With a purse of $200,000 on the line, the six and a half furlong contest will serve as a key prep for the prestigious Grade 1 Hopeful.

The slight morning line favorite in the evenly-matched field is I Spent It at odds of 7-2. Trained by Anthony Dutrow, the bay son of Kentucky Derby winner Super Saver was purchased for $600,000 as a two-year-old in training in March. He won his debut under Javier Castellano and will again have that jockey aboard. Since his first race, he has had a bullet workout at Saratoga and will break from the inside.

Todd Pletcher will send out Nonna’s Boy, installed at 4-1 on the morning line. The bay son of Distorted Humor is a homebred for Repole Stable and will try to improve off of a fourth-place finish in the Sanford (G3). He broke his maiden impressively by 5 ½ lengths in June and will again have John Velazquez in the irons. He will break from post position six for his third career outing.

Also in the field is Mr. Z, a juvenile son of Malibu Moon trained by D. Wayne Lukas. The chestnut colt will carry the gold and turquoise silks of Zayat Stables and he will have regular rider Corey Lanerie in the irons. After breaking his maiden in his debut at Churchill Downs in June, he went on to run second, beaten only a neck, in the Sanford (G3).