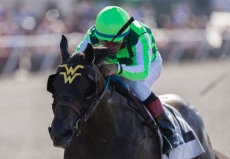 On Saturday at Del Mar, the featured race is the $300,000 Del Mar Oaks. Restricted to three-year-old fillies, the Grade 1 event will be contested at a mile and an eighth on the turf and has drawn a field of eight.

Prize Exhibit (GB) has been tabbed as the morning line favorite at odds of 5-2 for trainer James Cassidy. A dark bay daughter of Showcasing (GB), she has won five of her fifteen starts and is a multiple graded stakes winner. She comes into this race off of back to back graded stakes victories and was most recently seen winning the San Clemente Handicap (G2) at Del Mar. Santiago Gonzalez will be in the irons and they will break from post position six.

Sunset Glow trying for first win of the year

Second choice at 3-1 on the morning line is Sunset Glow for trainer Wesley Ward. A gray daughter of Exchange Rate, she was purchased for $140,000 as a yearling and has been on the board in all nine starts. She has three victories to her credit and was a two-time graded stakes winner as a juvenile. She was second behind Prize Exhibit (GB) last time out and will have Gary Stevens aboard from the outside post.

Also in the field at morning line odds of 4-1 is Zipessa for trainer Michael Stidham. A chestnut daughter of City Zip, she is undefeated from two starts and will be stepping up to stakes competition for the first time. She delivered as the favorite last time out over ten rivals and won by 2 ¾ lengths after contesting the pace. She will get a jockey change to Flavien Prat and they are scheduled to break from post position seven.