Princess Kennedy Looms as Heavy Favorite in $75,000 By The Light Stakes 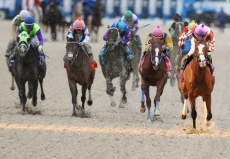 On Friday at Delta Downs, the featured race is the $75,000 By the Light Stakes. Restricted to three-year-old fillies, the seven-furlong contest has attracted a field of nine.

Princess Kennedy headlines the field as the morning line favorite at odds of 8-5 for trainer Michael Stidham. A bay daughter of Sun King owned and bred by David Thorner, she has been on the board in four of her seven starts and has two wins, including one against stakes company. She closed out her juvenile season with a runner-up effort in the Letellier Memorial Stakes in her most recent start. Jose Valdivia, Jr. will be aboard and they will break from post six.

Second choice at morning line odds of 7-2 is Flashy Appeal for trainer Scott Geiner. A dark bay daughter of Flashy Bull, she has been on the board in six of her nine outings and is a two-time winner. She was a minor stakes winner at Evangeline Downs as a juvenile and was third in her most recent strat in the Letellier Memorial Stakes. Steve Bourque will be aboard and they will break from post position five.

Also in the field at morning line odds of 5-1 is Areolite for trainer Steve Asmussen. A gray daughter of Tapit is a homebred for Winchell Thoroughbreds and is out of a stakes placed mare. She broke her maiden at first asking and will be trying to earn her first stakes victory after struggling in her subsequent starts. Gerard Melancon will be in the irons and they will break from post position two.