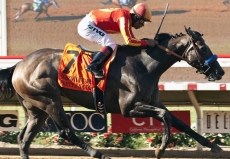 On Sunday at Del Mar, the featured race is the $100,000 Desi Arnaz Stakes. Restricted to two-year-olds, the race will be contested at seven furlongs on the main track and has drawn a field of seven fillies.

Pretty N Cool has been installed as the morning line favorite at odds of 2-1 and is one of two fillies in the race for trainer Bob Baffert. A gray daughter of Scat Daddy, she has won three of her four starts and her lone defeat came to eventual Breeders’ Cup champion Songbird. Last time out, she shipped east to Belmont Park and won the Matron Stakes (G2). Martin Garcia will be aboard and they will break from the outside post.

Second choice at morning line odds of 5-2 is Lucky Folie for trainer Richard Mandella. A chestnut daughter of Distorted Humor, she is out of a stakes winning mare and will be trying to earn her first black type victory. After breaking her maiden in her debut, she was third in her first start against stakes competition last time out in the Surfer Girl Stakes at Santa Anita. Gary Stevens will be in the irons and they will break from post three.

Surfside Tiara back in competitive form

Also in the field at morning line odds of 4-1 is Surfside Tiara, one of two fillies in the race who will be saddled by Jerry Hollendorfer. A chestnut daughter of Scat Daddy, she has been on the board in three of her four starts and will be trying to earn her second consecutive stakes victory. After a poor effort in the Del Mar Debutante (G1), she rebounded to win the Anoakia Stakes and will have Rafael Bejarano aboard from the inside post.