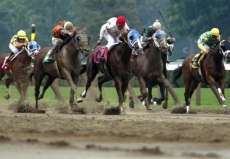 The Grade 3, $150,000 Sanford is one of two graded stakes events July 25 at Saratoga, immediately preceding the Grade 1 Diana.

A full field of eleven juveniles will line up to contest the Sanford at six furlongs on the main track, led by 3/1 morning line favorite Cocked and Loaded who opened his career with a maiden special weight victory at Keeneland, and followed that effort with a win in the Tremont Stakes June 5 at Belmont. The Larry Rivelli-trainee was particularly impressive in the Tremont, winning by a half length over next-out winner Paynes Prairie who was 2 3/4-lengths clear of the third place finisher. Irad Oritz will aboard Cocked and Loaded breaking from post 8.

Paynes Prairie (5/1) has been training well according to trainer Steve Asmussen, and will attempt to avenge his narrow Tremont loss to Cocked and Loaded. The son of Tale of Ekati bounced back in his last start to win going away July 4 at Belmont. The colt has one win from three starts and wouldn’t have to show much improvement to be a major player. Go-to jockey, Javier Castellano, gets the call breaking from post 7.

Calhoun runner making most of potential

He’s Comin in Hot (4/1) brings experience to the table with two wins in four career starts for trainer William Brett Calhoun. The Texas-bred son of Early Flyer has already outrun his pedigree, winning the Grade 3 Bashford Manor June 27 at Churchill Downs in his last start. Joel Rosario will ride breaking from post 6.