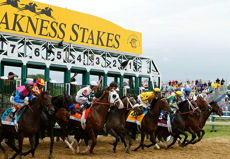 You have found the right place for 2021 Preakness Stakes free picks! The Preakness is the second jewel of the American Triple Crown, and one of the most important horse races of the year. The race will be run on Saturday, May 15, 2021, and it features 10 three-year-olds to go 1 3/16 miles for a $1 million purse and the blanket of black-eyed susans.

These top sportsbooks are also offering excellent rebates and bonuses for betting the Preakness Stakes online. So, this is the right time to learn your best options and choose the sportsbook that offers the best incentives for you.

The 2021 Preakness field, with Preakness trainers and jockeys as well as official morning lines, is as follows:

Pending a pre-race drug test, trainer Bob Baffert will be allowed to run his horse's Medina Spirit and Concert Tour in the Preakness. Bob Baffert is currently tied for most wins by a trainer in the Preakness, with seven. His horses will both be among the favorites, and his Kentucky Derby winners, in particular, run well at Pimlico.

D. Wayne Lukas will attempt to tie the Preakness trainer record. Lukas has won the Preakness six times already, with his most recent score coming in 2013 with longshot Oxbow. He has another long shot in this year’s race, rail-drawn Ram.

Steve Asmussen has won the Preakness twice and hopes to win his third with Midnight Bourbon. The other trainer in the 2021 Preakness who has won it before is Chad Brown, who won in 2017 with Cloud Computing.

Looking at the Preakness Stakes jockeys, hall of Fame jockey John Velazquez has yet to win this race. He rode the favorite last year with Authentic but ran a close second to Swiss Skydiver. This year he stands to have the favorite as well, Kentucky Derby winner Medina Spirit.

Javier Castellano rides Crowded Trade for trainer Chad Brown; Castellano and Brown united to win the Preakness in 2017 with Cloud Computing. Castellano also won with Bernardini in 2006. Jockey Mike Smith and trainer Bob Baffert, who send out Concert Tour, also won the Preakness with Justify in 2018. Smith also won in 1993 with Prairie Bayou.

Medina Spirit will be favored in the Preakness Stakes. Assuming he is allowed to run, he should be a strong contender. Bob Baffert has never run worse than second with a Derby winner in the Preakness, and he has a gutsy, frontrunning style that will play well at Pimlico. The price won’t be enticing, but he can’t be left out of the win end of exotics.

Concert Tour is Bob Baffert’s other horse and the likely second betting choice. Though he also has a forward running style, he hasn’t proven himself as apt to turn back a challenge as Medina Spirit has, and he is coming out of a disappointing third in a less-than-strong Arkansas Derby.

Crowded Trade is the value in the Preakness. He is tactically versatile enough to carve out a good trip under jockey Javier Castellano, and lightly enough raced to find further improvement in this spot. He fits the same profile as Brown’s other Preakness winner: a lightly-raced horse coming from New York Derby preps and primed to move forward.

Two longer shots to consider are Rombauer and Unbridled Honor. Rombauer ran a good race from closer to the pace than ever in the Blue Grass, and Michael McCarthy has an extremely good record with horses he ships out to race. Unbridled Honor comes in off of a good second in the Lexington Stakes; though he may not get all the way there with his closing style, he has a good chance to improve enough to invade the exotics.

Post time for the 2021 Preakness Stakes is scheduled for 6:37pm Eastern, 3:37pm Pacific. It is carded as the 13th race on a 14-race card. Nine of those races are stakes races for Thoroughbreds. The day’s final race is the UAE President Cup, a $100,000 Grade 1 race for Arabian horses.