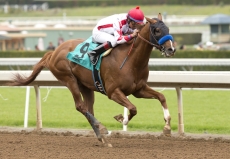 In the last 10 runnings of the Preakness Stakes, only one horse has been able to come from far off the pace to win. That was Curlin in 2007, who trialed the leader by 13 lengths at the half-mile mark after a stumble out of the gate, before roaring home to win by a head over Street Sense. That factor alone should lead handicappers to toss any that like to come from the back of the pack, and take a closer look at those likely to be running near the lead.

Speed horses not likely to last the distance

Of the other nine races, the winner either led throughout or was never more than five lengths off the lead at any point in the race. So other than Nyquist, who has proven his ability to sit off any pace, which horses stand the best chance of getting a winning Preakness run? Awesome Speed and Laoban are expected to the pacesetters, and of the two, Awesome Speed is more likely to last longer, based on the fact he was just headed going 1 1/8 miles last out, while Loaban has yet to hold a lead much past a mile.

Collected may be able to go with the leaders

If he makes the field, Gun Runner would be an obvious choice, based on the fact he was able to stay with an unexpectedly fast pace through the first mile of the Kentucky Derby and was able to stay just off the pace in both of his Derby prep wins. But his connections have not yet decided if he'll run, and a no show might just leave the door open for Collected to offer a challenge. He comes into the Preakness off a win in the (G3) Lexington, where he was able to track just off an honest 47.47 half-mile, and finished the 1 1/16 miles in 1: 43.33, faster than the 1: 43.79 that Nyquist ran in his winning Breeders' Cup Juvenile race (albeit as a two year old) at the same distance on the same Keeneland surface. While he may not hold off the Derby champ for the win, the numbers suggest he's a solid play in the exotics.