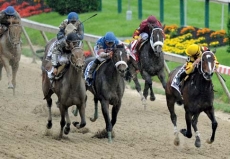 Who is going to win 2017 Preakness Stakes?

The final entries have been taken and the field is set for the running of the 2017 Preakness Stakes from Pimlico Race Course on Saturday. Ten US-based thoroughbreds have dawn into the field, with five coming out of the Kentucky Derby, and five others joining the Triple Crown series for the first time.

Here's a rundown of the field by post position, with morning line odds. Post time for the Preakness Stakes is 6:45 PM Eastern.

#1 - Multiplier (20-1): Draws in off a narrow win in the (G3) Illinois Derby, a race that featured three very quick sub-24 second opening 1/8ths of a mile. They probably won't go that fast here and he's taking a big step up in class.

#2 - Cloud Computing (20-1): Only has three starts in his career and most recently ran third in the (G2) Wood Memorial, a race won by co-favorite Irish War Cry. Cloud Computing finished a very disappointing 10th in the Kentucky Derby.

#3 - Hence (12-1): Took a lot of money as a long shot choice in the Derby and ran into a bit of traffic trouble, but made no real impact coming from way back to finish 11th.

#4 - Always Dreaming (4-5): The Kentucky Derby winner is the favorite here and now has won four straight. He'll want to be up near the lead early and hope his speed once again seperates him from the rest as they come down the lane.

#5 - Classic Empire (4-1): 2016 Breeders' Cup Juvenile winner draws very well just outside his main rival where he can stalk the lead all the way around and wait for his chance to make a move as they hit the top of the stretch.

#6 - Gunnevera (12-1): has to make sure he doesn't fall too far back, especially when those inside of him race for the early lead. He should be able to easily drop off and get a good position on the rail to make a late run.

#7 - Term Of Art (25-1): California-based runner has tried some high-level stakes company in his home state, but only has one third-place finish in four tries this year to show for it.

#8 - Senior Investment (25-1): Yet another of the real deep closers in the Preakness field, he came from way back to get up just in time to win the (G3) Lexington Stakes in his last start. The competition, however, will be much tougher Saturday.

#9 - Lookin' At Lee (11-1): Rode the rail all away around to grab second-place in the Derby. He won't get the same trip here and is unlikely for the win, but remains a good play on the bottom of exotic bets.

#10 - Conquest Mo Money (16-1): The only real "speed" horse in the race will want the early lead and his connections probably would have preferred to be a bit closer to the middle of the gate, but with drop-back types next to him the post position shouldn't cause too many problems.