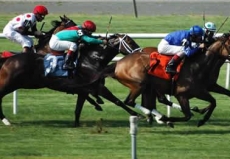 Of the five stakes events carded January 30 at Gulfstream Park, the Grade 3 Sweet Chant featuring 12 three year-old fillies going a mile on the grass is the best betting race of the afternoon.

Drawn to the inside in post 2, Sapphire Kitten is the 7/2 morning line favorite for trainer Joe Sharp. The daughter of Kitten’s Joy won only a maiden race in four starts as a juvenile, but collected significant paychecks while finishing second in the Grade 3 Jessamine, fourth in the Grade 1 Breeders’ Cup Juvenile Fillies Turf, and third in the Wait A While Stakes. The steady closer will be ridden by regular jockey Julien Leparoux and will benefit from a fast early pace.

Conquest Bebop (5/1) is not ideally drawn from post 12, but has shown considerable talent in both career starts. The Mark Casse trainee annihilated maiden foes November 7 at Woodbine by 7 1/2-lengths on the Polytrack before returning January 10 at Gulfstream to lose by a head in an optional claiming race while breaking from post 11 in her turf debut. Hall of Fame jockey Mike Smith gets the call and may try to tuck and save ground going into the first turn.

Longshot speedster worth a look

Hidden Treat (15/1) will need to improve while stretching out and facing better competition, but is the clear speed of the race despite being poorly drawn from post 11. The Arnauld Delacour trainee is well-bred for more ground as a daughter of stamina-laden Lemon Drop Kid. Delacour connects at a 14% clip with sprint to route runners. Hidden treat is undefeated in two sprint efforts.