Picks For The Woodbine Mile Stakes 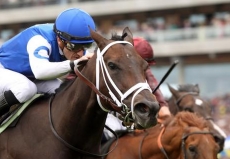 There's a true superstar in the field for the 2016 Woodbine Mile, as Tepin returns to North America after beating some of the best in the UK in the Group 1 Queen Anne Stakes at the Royal Ascot meet in mid June. Undefeated in four starts this year, the five-year-old mare has run her record to seven straight wins going back to 2015, including beating males in the 2015 Breeders' Cup Mile. She will also be getting lasix here for the first time in her career, and all-in-all is clearly the one to beat at odds of 1-2 in the morning line.

Going up against her as second choice in the ML is UK-bred and raced Mutakayyef (7-2) who has never been out of the money in 13 lifetime starts, although he only has the one Group-level win to his credit. Last out he ran third in the very tough Group 1 Juddmonte International at York. The Woodbine Mile will be his first start on this side of the pond. All the rest of the entrants in the field are in double digits, including Full Mast (12-1) who has a run over the Woodbine turf, finishing fourth as the favorite in the King Edward Stakes two starts back. He ran into traffic trouble there at the top of the stretch but was still beaten by only two lengths, and a clean trip could put him in the frame here. The Penn-bred Mr. Owen (15-1) has spent most of his career in France, where he has had some success at the lower Group level, with his only previous North American start in this race last year, where he was sixth.