Picks For The Pennsylvania Derby at Parx Racing Saturday 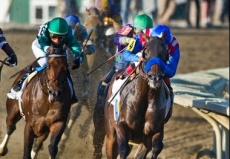 After setting the racing world abuzz going undefeated through to the Kentucky Derby, a pair of third and fourth-place finishes in his past two now have racing fans wondering about Nyquist, the Penn Derby morning line favorite at odds of 5-2. With both races coming on off tracks, those efforts can be tossed, with the hope that firm footing will put the Doug O'Neill trainee back in the winner's circle. But at low odds in a large and talented field, it's tempting to bet against him.

Exaggerator comes in as the 9-2 second choice in the ML, but like Nyquist his recent performances leave one wondering. Bouncing back from a poor effort in the Belmont Stakes, he got back on a sloppy track to win the (G1) Haskell Invitational, but last race out ran very poorly at Saratoga to finish 11th in the (G1) Travers. The jury is still out on whether he is really just a wet-track specialist, but it's looking more and more the case, and again, it's very tempting to go against him here. Never one to be overlooked, Bob Baffert seems to have Cupid (5-1) cranked up for this one after two straight wins in the West Virginia and Indiana Derbys over what were pretty good fields. Sunny Ridge (12-1) took a big step forward to run third in the Haskell, and a similar forward move could put him in the frame. The always game Gun Runner (6-1) is a logical choice to get a piece, although you have to wonder how much a very tough campaign has taken out of him.