Picks For The Cotillion Stakes at Parx Racing Saturday 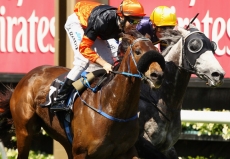 Until someone beats her - and right now, no one is even coming close - Songbird (1-2) will continue to be the overwhelming favorite in any race for three-year-old fillies. She's unbeaten in her career, with 10 straight wins, and she has already beaten the other top contenders here in the past, in some cases more than once. Having won her last four by a combined more than 20 lengths, there's nothing in her form to suggest she's tailing off. Any other winner would be considered a big upset.

With that said, there are other quality fillies in the field, including the second choice in Cathryn Sophia (5-2) the winner of this year's Kentucky Oaks, and one who has not yet come up against Songbird. She's had her best results lately coming with a move in the lane, and she has a recent win over the Parx surface in the Princess of Sylmar Stakes. Multiple graded-stakes winner Carina Mia (5-1) ran her heart out two starts back in the (G1) Coaching Club American Oaks but couldn't get to Songbird, and after a third last out in the (G1) Ballerina behind two at double-digit odds, you have to wonder how much that effort took out of her. Graded-stakes winner Land Over Sea (10-1) has been off since early July, and a return to her early season form should put her ahead of the rest of the field here.