Picks And Predictions For The 142nd Kentucky Derby at Churchill Downs 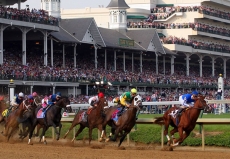 With all of the expected 20 starters looking like they'll go to the gate in the 2016 Kentucky Derby, the waiting is over and we know what the final lineup will be. What is yet to be seen is how the race will play out, but here's one possible scenario that seems as likely as any other, whereby the favorite controls the race.

At 3-1 in the morning line, Nyquist is a deserving favorite for the Run for the Roses. Sired by Uncle Mo, and trained by 2012 Derby winner Doug O'Neill (I'll Have Another), Nyquist is undefeated in seven career starts, including wins in the 2015 Breeders' Cup Juvenile, and most recently, he finished his Kentucky Derby prep season with a solid victory in the Florida Derby. If he gets a clean break from the #13 gate, jockey Mario Gutierrez should be able to put the colt where he wants, either right on the lead, or he lets the outside speed do the early work, and waits to make his move coming out of the far turn. From there it should be a matter of whether he can hold through the long Churchill stretch, as the only question regarding Nyquist is if he has the pedigree to last the Derby's 10 long furlongs all the way to the wire.

The real running begins when they turn for home

Two spots to Nyquist's inside, Exaggerator breaks from post #11, and from there jockey Kent Desormeaux should get a good look at where Nyquist wants to be going into the first turn. Although Exaggerator has been coming from back in the pack most recently, he's not going to want to spot the favorite more than a half-dozen lengths early. He possesses an excellent turn of foot, and when Nyquist decides to go, Exaggerator should go with him, and try to run him down in the lane. Mor Sprit and Gun Runner are likely to be in the mix at that point as well. Behind those two will come the cavalry charge, with Suddenbreakingnews, Creator and possibly Whitmore all taking up the chase. Given some pace to run at any of those could be in the mix late.