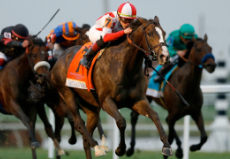 January 23 will mark the fifth running of the $3 million Pegasus World Cup, with 2021 picks available right here! A field of 12 is expected to go forward into the gate at Gulfstream Park in Hallandale Beach, Florida, with Knicks Go and Code of Honor the horses to beat in the nine-furlong race. This is one of the most important horse races of the year, and you won't want to miss out on betting it!

The field for the fifth Pegasus World Cup (G1) is:

Trainer Bob Baffert, who is the winningest Pegasus World Cup trainer by a win in 2017 with Arrogate and 2020 with Mucho Gusto, does not have a runner in the race this year. That means all of the trainers involved will be trying to get their first-ever Pegasus World Cup win.

Code of Honor was a Grade 2 winner over the Gulfstream Park track in 2019. He had a rough 2020, running second as the favorite in the Grade 1 Clark and only winning alone Grade 3 event at Belmont Park. He has been training very well and has looked for perfect schooling in the paddock at Gulfstream Park in January.

The rest of the best runners in the Pegasus World Cup include Knicks Go, who took the Breeders' Cup Dirt Mile (G1) last out but has to prove that he can stretch out to a distance of ground. Tax won the local prep here, Gulfstream Park's Harlan's Holiday (G3), very impressively. True Timber finished eighth in this race last year, but most recently surprised by winning the Grade 1 Cigar Mile at Aqueduct. Sleepy Eyes Todd has won three of his last four starts, including a major race at Keeneland on the Breeders' Cup undercard. He is unbeaten on the Gulfstream track and won a rich Grade 2 at this distance in the Charles Town Classic (G2). Math Wizard was a Grade 1 winner in 2019 when he beat the likes of War of Will and Improbable in the Pennsylvania Derby. Math Wizard was fifth in the Breeders' Cup Classic that year but hasn't won since. Most recently he ran fourth behind Tax in the Harlan's Holiday. Mr Freeze was fifth in the Grade 1 Clark Handicap in November, but is a winner over the track and took the Grade 2 Fayette at prestigious Keeneland in October.

Post position is a major factor in two-turn races at Gulfstream Park. You will want to consider it strongly when picking the Pegasus World Cup winner. Outside posts don't do well at all, and only if there is considerable speed from the outside horse. Inside positions and in the middle are more likely to succeed.

You will also want to bet on a horse that has proven they can go the distance, which is why Code of Honor is a better play than Knicks Go. The latter might be the best horse in training, but he hasn't yet proven it. A horse like Sleepy Eyes Todd will be a bit of a price, despite winning several races in a row and seeming to flourish at the right time. Mr Freeze likes this track, and Tax was ultra eye-catching in his comeback. Any of these horses can be successful in the Pegasus World Cup!

How to Bet the Pegasus World Cup Online

If you want to make the most of your betting money, you need to learn where to bet the Pegasus World Cup online. There are lots of websites out there that claim they know what you want in a platform, but you can read and trust our reviews on the best online betting platforms and sportsbooks. It will help to learn how to properly bet on horse racing, too, to make sure you get the most profit from your selections. Should you make one big win bet, or spread it out on a few longshots? These are the considerations when planning your bets for the Pegasus World Cup.