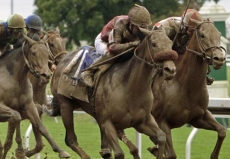 On Saturday at Keeneland, the track will host the 78th running of the $500,000 Ashland Stakes. Restricted to three-year-old fillies, the mile and a sixteenth contest offers Grade 1 status and has drawn a field of seven Kentucky Oaks (G1) hopefuls.

Peace and War tops the field as the morning line favorite at odds of 3-1 for trainer Olly Stevens. Purchased for $300,000 as a yearling, the bay daughter of War Front began her career in Great Britain where she won one of her three starts. She made her stateside debut at Keeneland’s fall meet where she pulled an upset in the Alcibiades (G1) at odds of 23-1. Julian Leparoux has retained the mount and they will break from post position three.

Todd Pletcher will saddle Angela Renee, the second choice at odds of 7-2 on the morning line. A homebred daughter of Bernardini for Siena Farms, she has won two of her seven starts including the Chandelier (G1) as a juvenile. She finished fourth in the Rachel Alexandra Stakes (G3) in her first start of the year and has been training steadily since that race at Palm Beach Downs. John Velazquez will be aboard from post four.

Also in the field and also set at morning line odds of 7-2 is Lovely Maria for trainer Larry Jones. A bay daughter of Majesticperfection, she has been on the board in five of her six starts and has two wins to her credit. She was last seen finishing second in the Rachel Alexandra (G3) and will be trying for the first stakes win of her career.  Kerwin Clark, her regular rider, will be aboard and they will break from post position seven.