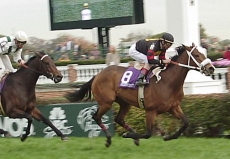 On Saturday at Gulfstream Park, the featured race is the 26th running of the $75,000 Tropical Park Oaks. Restricted to three-year-old fillies, the race will be contested at a mile and a sixteenth on the turf and has drawn a full field of fourteen with two others listed as also-eligible.

Party Now headlines the field as the morning line favorite at odds of 3-1 for trainer Claude McGaughey. Bred and owned in partnership by Stuart Janney, III and Phipps Stables, the sophomore daughter of Tiznow is a half-sister to multiple graded stakes winner Criminologist. She has been first or second in five of her six starts and is trying to earn her first stakes victory and fourth career win. John Velazquez, aboard for her win last time out, will be back in the irons from post two.

Second choice at 4-1 on the morning line is Dancing House for trainer Kiaran McLaughlin. A gray daughter of Tapit out of the Grade 1 winning turf star Tout Charmant, she has won two of her six career starts. She returned in September after a ten-month hiatus following a fifth-place finish in the 2013 Breeders’ Cup Juvenile Fillies Turf (G1) with a runner-up effort against allowance company and came back to win next out. Irad Ortiz, Jr. will be aboard from post four.

Also in the field at morning line odds of 6-1 is Granny Mc’s Kitten for trainer Chad Brown. Bred and owned by Ken and Sarah Ramsey, the bay daughter of Kitten’s Joy has two wins from eight starts, one being a stakes victory as a juvenile. She was last seen finishing third in the Riskaverse Stakes as the favorite in August and has been training steadily since then. Joel Rosario will be aboard and they will break from post seven.