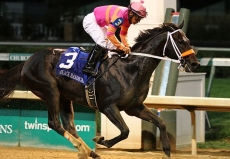 On Saturday at Gulfstream Park, the track will host the 4th running of the $100,000 Harlan’s Holiday. The race will be contested at a mile and a sixteenth on the main track and has drawn a field of nine.

The veteran campaigner Pants on Fire will headline the field as the morning line favorite at 2-1. Fresh off of a third-place finish in the Breeders’ Cup Dirt Mile (G1) in October, the multiple graded stakes winner has been training sharply for his return to the races.  He has been on the board in all five starts this year with one win and has boosted his career earnings to over $1.4 million. Trained by Kelly Breen, the six-year-old son of Jump Start will have regular rider Paco Lopez aboard from post four.

Marcus Vitali will saddle the second choice, Valid, at 3-1 on the morning line. Purchased for $500,000 as a yearling by Crossed Sabres Farm, the four-year-old gelded son of Medaglia d’Oro has won five of his nine starts this year included the Monmouth Cup (G2). He was last seen winning the Eight Miles West Stakes as the heavy favorite over five rivals. He has won three of his four outings at Gulfstream Park and will have regular rider Orlando Bocachica in the irons from post seven.

Also in the field is the lightly-raced Liam’s Map at morning line odds of 7-2 for trainer Todd Pletcher. Purchased for $800,000 as a yearling, the three-year-old son of Unbridled’s Song is out of a graded stakes winning daughter of Trippi. He will be making his stakes debut after defeating allowance company by 11 ½ lengths as the heavy favorite after romping in his maiden win two starts back. John Velazquez will remain aboard and they will break from post  eight.