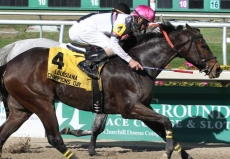 Pacific Pink tops the field as the morning line favorite at odds of 8-5 for trainer Edward Johnson. A three-year-old daughter of Private Vow, the dark bay filly has been on the board in all nine starts and is a five-time winner. She is a multiple stakes winner against state-bred competition and was last seen winning the Elge Raspberry Stakes at Louisiana Downs. Robby Albarado will be aboard and they are scheduled to break from post position three.

Second choice at morning line odds of 5-2 is Heatseeker Sharon for trainer Frank Leggio. A four-year-old daughter of Heatseeker (IRE), the chestnut filly has won four of her seventeen starts and has seven runner-up finishes to her credit. She has one stakes victory which came in July at Evangeline in the Louisiana Legends Distaff Stakes. Colby Hernandez will be in the irons and they will break from post position four.

Also in the field at morning line odds of 3-1 is Aliana for trainer Morris Nicks. A five-year-old daughter of Majestic Warrior, she has been on the board in thirteen of her sixteen outings and is a four-time winner. She will be trying to earn her first black type victory and was last seen finishing second in an allowance race at Fair Grounds. Patrick Valenzuela will be aboard and they will break from post position five.