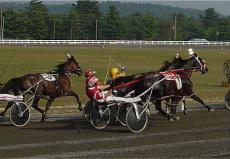 Harness racing returned to its roots as the Ohio County Fair season kicked off in Paulding, Ohio on June 10th; sixty-five county fairs will feature racing on one hundred and twenty days ending on October 10th in Fairfield County.

Twenty-eight counties provide single day racing and twenty-nine have races over two days. Three day racing takes place in five counties with three counties offering four day programming. The highlight of the summer/fall season is the Little Brown Jug; the second leg of pacing’s Triple Crown. The race is for 3 year-olds and is run on the ½ mile Grand Circuit in Delaware County; the world’s finest pacers and drivers are featured. In order to win the coveted “Jug” a horse must win two heats. If there is no winner after two heats the winners return for a final race.

As stated in a press release, in 2013 the Ohio Fair Racing Conference was established “in an attempt to simplify the staking process for horsemen, to reduce the complexity of administering the racing program by Fair Boards, and to increase harness racing participation at the fairs.” Multiple circuits continue to administer county fair races; only seventeen fairs represent OFRC in this, its inaugural season.

With additional purses Ohio’s county fairs are hoping for increased wagering which should push them over 2013’s total handle of $2,581, 131.60.