Off The Tracks Facing Six Rivals in $250,000 Gulfstream Park Oaks 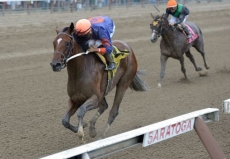 On Saturday at Gulfstream Park, the graded stakes action will continue with the $250,000 Gulfstream Park Oaks. Restricted to three-year-old fillies, the Grade 2 event will be contested at a mile and a sixteenth and has drawn a field of seven.

Off the Tracks headlines the competitive field as the morning line favorite at odds of 6-5 for trainer Todd Pletcher. A bay daughter of Curlin, she is undefeated from three career starts and will be making her second start as a sophomore. After breaking her maiden at Saratoga at first asking, she followed that up with a win in the Schuylerville Stakes (G3). She returned off of a seven-month layoff to win an allowance race last time out. John Velazquez will be aboard and they will break from the outside post.

Gomo returning off of a layoff

Second choice at morning line odds of 3-1 is Gomo for trainer Doug O’Neill. From the first crop of champion Uncle Mo, the bay filly was purchased for $75,000 as a two-year-old by Reddam Racing and has been on the board in all five starts. She is trying to earn her third career victory and has been on the shelf since winning the Alcibiades Stakes (G1) at Keeneland in October. Mario Gutierrez will be aboard and they will break from post position five.

Also in the field at morning line odds of 6-1 is Go Maggie Go for trainer Dale Romans. A bay daughter of Ghostzapper bred and owned by Mike Tarp, she will be making her stakes debut and first start against winners. She made her career debut a winning one at Gulfstream Park in March and won by four-lengths to break her maiden. Luis Saez will be back aboard and they are scheduled to break from post position three for her step up in class.