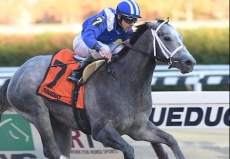 Some horse races seem predestined to become instant classics - ones that leave fans coming back to the Youtube clips - or whatever online video exits in the future years from now. The Grade 1 Florida Derby April 2 at Gulfstream Park has that feel as the top two Derby challengers - both unbeaten - vye for another accolade to add to their sterling resumes.

Mohaymen is the even money morning line favorite representing the east coast and trainer Kiaran McLaughlin. The sinewy gray son of Tapit is perfect in five starts, including consecutive graded stakes victories in the Remson, Holy Bull, and Fountain of Youth Stakes. The last two victories, both recorded at Gulfstream Park, are the only starts for Mohaymen so far in 2016 with the powerful colt pulling away in both under wraps in the stretch. Mohaymen's primary advantage appears to be his home track advantage over his equally talented and perhaps more accomplished west coast rival.

Nyquist (6/5) has done one better than Mohaymen with a perfect record of 6 for 6, including three grade 1 victories. The Doug O'Neill trainee has done most of his damage in California where he won the Best Pal, Del Mar Futurity, FrontRunner, and most recently the San Vicente, but the biggest win of the colt's dynamic career came on the road when the son of Uncle Mo captured the Grade 1 Breeders' Cup Juvenile at Keeneland.

If the rest of the eight runners are to have any chance to challenge the top two, it doesn't show on paper. Bettors will most likely spend their time filling out logical contenders for the third slot of the trifecta or fourth slot of the superfecta rather than trying cash in on the implausible scenario that both Nyquist and Mohaymen misfire in the top spots.