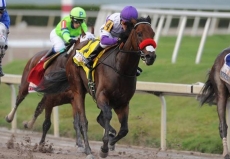 The field has been officially set for the $1.5 million Preakness Stakes (G1). The second jewel of the Triple Crown has drawn a field of eleven and will be contested at a mile and three-sixteenths at Pimlico Race Course on Saturday, May 21.

The undefeated Nyquist headlines the field as the morning line favorite at odds of 3-5 for trainer Doug O’Neill. Owned by Reddam Racing, the bay colt is from the first crop of champion Uncle Mo and he emulated his sire’s Eclipse Award winning two-year-old season with a victory in the Breeders’ Cup Juvenile (G1). He won the Kentucky Derby (G1) last time out as the favorite and will try to move one step closer to winning the Triple Crown. Mario Gutierrez will be aboard from post three.

Exaggerator could move up with an off track

Second choice at morning line odds of 3-1 is Exaggerator for trainer Keith Desormeaux. A bay son of 2007 Preakness Stakes (G1) winner Curlin, he is coming out of a runner-up finish in the Run for the Roses. Prior to the Kentucky Derby (G1), he won the Santa Anita Derby (G1) impressively over an off track. There is rain in the forecast for Saturday in Maryland. Kent Desormeaux will be aboard and they will break from post position five.

Also in the field is the untested Stradivari for trainer Todd Pletcher. A dark bay son of Medaglia d’Oro, he will be trying stakes competition for the first time after consecutive open length victories. After a fourth-place finish in his debut, he broke his maiden over an off track in his next start and followed that up with a win against allowance competition at Keeneland. He will have John Velazquez in the irons and they are scheduled to break from the outside post.