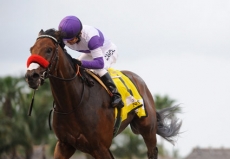 The Kentucky Derby (G1) will be run on Saturday, May 7 and the projected field is shaping up to be intriguing and competitive. Several key contenders, including Nyquist, have had recent workouts in preparation for the Run for the Roses.

Nyquist, the likely favorite, has been training at Keeneland and is scheduled to ship to Churchill Downs at the beginning of May. He is undefeated from seven starts and capped off his Eclipse Award winning juvenile season with a victory in the Breeders’ Cup Juvenile (G1) last fall at Keeneland. As a sophomore, he is two for two and was last seen handing Mohaymen the first defeat of his career in the Florida Derby (G1) at Gulfstream Park.

Slow and steady in the mornings

His most recent workout was on April 23 at Keeneland and he worked five furlongs in 1:01.80, a slightly faster time than the 1:02.60 he clocked eight days prior. The bay son of Uncle Mo has never been a particularly fast workhorse in the mornings and his recent efforts are par for the course. He worked in company with stablemate Ralis, a graded stakes winner. Graded stakes winning filly, Cathryn Sophia had the fastest workout at that distance that morning.

Nyquist is trained by Doug O’Neill and owned by Paul Reddam’s Reddam Racing, LLC. He was purchased for $400,000 as a juvenile and has earned over $3.3 million. In 2012, Reddam and Doug O’Neill teamed up with jockey Mario Gutierrez to win the Kentucky Derby (G1) as well as the Preakness Stakes (G1) with I’ll Have Another. Gutierrez is the regular rider for Nyquist and the trio will attempt for a repeat performance in this year’s Derby.