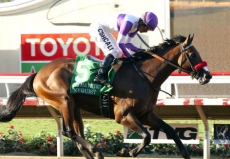 On Saturday at Santa Anita, the track will host the $300,000 Front Runner Stakes. Featuring some of the top two-year-olds colts and geldings in the country, the Grade 1 race will be contested at a mile and a sixteenth.

Nyquist headlines the field of eight as the morning line favorite at odds of 6-5 for trainer Doug O’Neill. A bay son of Uncle Mo, he was purchased for $400,000 in March and is undefeated from three starts. After breaking his maiden in June at Santa Anita, he has won back to back graded stakes races and was last seen winning the Del Mar Futurity (G1). Mario Gutierrez will be aboard carrying the purple and white silks of Reddam Racing and they will break from post four.

Second choice at morning line odds of 4-1 is Hollywood Don for trainer Peter Miller. A dark bay son of Tapit, he was purchased for $245,000 earlier in the year and is out of the multiple graded stakes winning mare Ocean Drive. After a disappointing debut, he has won his last two races and last time out made his stakes debut a winning one in the Del Mar Juvenile Turf Stakes. Brice Blanc will be in the irons and they will break from post five.

Also in the field at morning line odds of 6-1 is Mt Veeder for trainer Bob Baffert. A chestnut son of Ghostzapper, he fetched $200,000 as a yearling and will be stepping up to graded stakes competition for the first time after winning both career starts to date. He won the Contender Stakes at Los Alamitos last time out following a debut win at Del Mar in August. Martin Garcia will be aboard and they will break from the outside post.