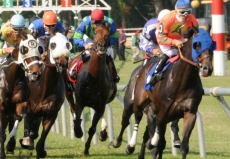 On Saturday at Tampa Bay Downs, the 30th running of the $100,000 Inaugural will feature a field of nine two-year-old colts and geldings. The race is scheduled to be run at six furlongs on the main track.

Supreme Justice has been installed as the morning line favorite at odds of 7-2 for owner and trainer G. Ray Trisler. Bred in Indiana, the bay son of Lantana Mob was a $50,000 purchase in November after winning his first three starts and finishing fourth in the Indiana Futurity. Two of his victories have come against state-bred competition. Fernando de la Cruz, his regular rider, will be aboard and they will break from post position seven.

Got Winged a maiden taking on stakes company

Second choice at 4-1 on the morning line is Got Winged who will be trying to earn his first career victory. Trained by Mike Dini, the juvenile son of Posse has had three starts against New York-bred competition and has been on the board in two of them.  He was last seen finishing third at Aqueduct after setting the pace. Since arriving at Tampa, he has been training forwardly and will have Rosemary Homeister, Jr. in the irons from post position six.

Also in the field and set at morning line odds of 9-2 is Lord Tyrion for trainer Ian Wilkes. Purchased for $110,000, the bay son of Discreetly Mine is winless since breaking his maiden in July. He has been fifth in his last two starts, most recently in the Clever Trevor Stakes at Remington Park.  Ron Allen, Jr., one of the top regular riders at Tampa Bay Downs, will be aboard for the first time and they will break from post position eight.