Mohaymen And Nyquist Face Off in Epic $1 Million Florida Derby 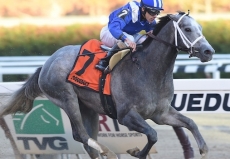 On Saturday at Gulfstream Park, the featured race is the $1 million Florida Derby. A key prep towards the Kentucky Derby (G1), the Grade 1 event will be contested at a mile and an eighth and has drawn a field of ten colts and geldings.

Mohaymen tops the field as the even-money favorite on the morning line for trainer Kiaran McLaughlin. A gray son of Tapit, he was purchased for $2.2 million as a yearling and is undefeated from five starts. After winning three races as a juvenile, he is two for two this year against graded stakes competition and was last seen winning the Fountain of Youth Stakes (G2). Regular rider Junior Alvarado will be aboard and they will break from post position nine.

Second choice at morning line odds of 6-5 is Nyquist for trainer Doug O’Neill. A bay son of Uncle Mo owned by Reddam Racing, he won all five starts as a juvenile and capped off his season with a victory in the Breeders’ Cup Juvenile (G1) which secured him the Eclipse Award for champion two-year-old. He made his sophomore debut a winning one last time out in the San Vicente Stakes (G2). Mario Gutierrez will be aboard from post position four.

Also in the field at morning line odds of 20-1 is longshot Takeittotheedge for trainer Dale Romans. Purchased for $135,000 as a yearling, the chestnut son of Broken Vow is stepping up to stakes competition for the first time. He broke his maiden in his career debut last time out by 7 ¾ lengths over eight rivals. Tyler Gaffalione will be aboard and they are scheduled to break from post position seven as he goes for two in a row.