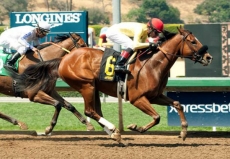 On Sunday at Del Mar, the featured race is the $300,000 Bing Crosby Stakes. A Grade 1 event scheduled to be run at six-furlongs on the main track, the race offers the winner an automatic berth in the Breeders’ Cup Sprint (G1) as part of the Breeders’ Cup Challenge Series.

Masochistic has been tabbed as the morning line favorite in the field of six at odds of 6-5 for trainer Ron Ellis. A California-bred son of Sought After, he has won six of his eight starts and comes into this race off of a three-race win streak. Two of those victories came against graded stakes competition and he won the Triple Bend Stakes (G1) last time out. Tyler Baze will be in the irons and they will break from post position five.

Second choice at 3-1 on the morning line is Appealing Tale for trainer Peter Miller. A five-year-old gelded son of Tale of the Cat, he is a four-time career winner and will be trying to step up and earn his first graded stakes victory. Last time out, he was second behind Masochistic in the Triple Bend (G1) and won an optional claiming race two starts back. Joe Talamo will be aboard from the outside post.

Distinctiv Passion back on track from Dubai

Also in the field at morning line odds of 4-1 is Distinctiv Passion for trainer Jeff Bonde. A five-year-old son of With Distinction, he has won eight of his seventeen starts and is a multiple graded stakes winner. He returned from Dubai last time out to win the Los Angeles Stakes (G3) to earn his second win of the year. Edwin Maldonado will be aboard and they are scheduled to break from post two.