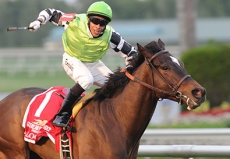 On Saturday at Gulfstream Park West, the featured race is the $100,000 Tropical Turf Handicap. The Grade 3 event is scheduled to be run at a mile and a sixteenth on the turf and has drawn a field of nine colts and geldings with three others entered for the main track only.

Marcus Vitali will saddle Lochte as the morning line favorite at 9-5 odds. A five-year-old gelded son of Medaglia D’Oro, he is an eight time career winner with multiple graded stakes victories to his credit. He was fourth in this race last year and is coming in to this year’s renewal off of back to back victories against stakes competition. Matthew Rispoli will be in the irons and they are scheduled to break from post position six.

Second choice at morning line odds of 7-2 is All Included for trainer Todd Pletcher. A chestnut son of Include, the four-year-old colt has won four of his nine starts and will be trying to earn his first graded stakes victory. Last time out, he was fifth in the Knickerbocker Stakes (G3) at Belmont Park and has two wins so far this year. Javier Castellano will be aboard and they will break from post position two.

Also in the field at morning line odds of 8-1 is Take the Stand (ARG) for trainer Bill Mott. A four-year-old son of Not for Sale (ARG), he began his career in Argentina and made his North American debut in August. He has won five of his nine starts and is stepping up to graded stakes competition after finishing fourth in an optional claiming race. Jose Lezcano will be aboard from post position four.