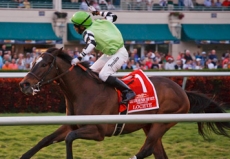 On Saturday at Gulfstream Park, the featured race is the $200,000 Fort Lauderdale Stakes. A Grade 2 event scheduled to be run at a mile and a sixteenth on the turf, the stakes race has drawn a field of eleven colts and geldings with one additional entered for the main track only.

Lochte headlines the competitive field as the morning line favorite at odds of 3-1 for trainer Marcus Vitali. A six-year-old son of Medaglia d’Oro, he is a nine time winner and a multiple graded stakes winner. He is coming into this race off of three consecutive stakes victories and was most recently seen winning the Tropical Turf Handicap (G3) at Gulfstream Park West. Javier Castellano will be aboard and they will break from the rail.

War Correspondent returning off of a layoff

Second choice at morning line odds of 4-1 is War Correspondent for trainer Christophe Clement. A six-year-old son of War Front, he has been on the board in all eight starts and is a four-time winner. He will be making his first start off of a ten-month layoff since winning the Appleton Stakes (G3) last March. Jose Lezcano will be aboard and they will break from post position seven.

All Included trying to return to winning form

Also in the field at morning line odds of 6-1 is All Included for trainer Todd Pletcher. A four-year-old son of Include, he has won four of his ten starts and will be trying to earn the first graded stakes win of his career. He has been fifth in his most recent two starts against graded stakes competition and will try to move forward with Luis Saez aboard from post position six.