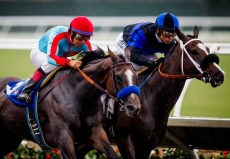 On Sunday at Santa Anita, the featured race is the 13th edition of the $75,000 Paseana Stakes. The mile and a sixteenth contest has drawn a competitive field of eight fillies and mares.

Bob Baffert will saddle the morning line favorite, Tiz Midnight, at odds of 8-5. A five-year-old daughter of Midnight Lute, she has been on the board in eight of her nine career starts with four wins to her credit. She earned the first graded stakes win of her career last time out with a victory by a head as the heavy favorite over a similar field in the Bayakoa Stakes (G2). Victor Espinoza will remain aboard and they will break from post position four.

Second choice at 3-1 on the morning line is Warren’s Veneda, a California-bred mare trying to avenge her narrow lost to Tiz Midnight last time out. Trained by Craig Lewis, the five-year-old daughter of Affirmative has won five of her nineteen starts including a minor stakes race. She has gone winless since November of 2013 and was on the board in half of her eight starts last year. Tyler Baze will remain aboard and they will break from post position five.

Eblouissante returning off of another layoff

Also in the field and a longshot at 10-1 on the morning line is Eblouissante, a six-year-old half-sister to champion Zenyatta. The dark bay mare has had a career plagued by layoffs since her winning debut in November of 2012 and is returning off of a five-month hiatus. Trained by John Shirreffs, she will race without blinkers for the first time in her six-race career as she goes for her first stakes win. Veteran jockey Gary Stevens will be aboard from post position seven.