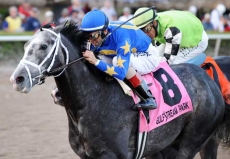 On Friday, all eyes will be on Keeneland as the track hosts the Breeders’ Cup for the first time. One of the biggest races on Friday is the $1 million Breeders’ Cup Dirt Mile. A one mile event, the Grade 1 has drawn a field of eleven.

Todd Pletcher will saddle Liam’s Map as the even-money favorite on the morning line. A four-year-old son of Unbridled’s Song, he was purchased for $800,000 as a yearling and has won five of his seven starts. After a narrow defeat to Honor Code in the Whitney (G1) at Saratoga, he came back to romp in the Woodward Stakes (G1). Javier Castellano has retained the mount and they will break from post position three.

Second choice at morning line odds of 5-1 is Wicked Strong for trainer James Jerkens. A four-year-old son of Hard Spun owned by Centennial Farms, he has won three of his eighteen starts and will be trying for his first victory of the year. He is cutting back to a mile after competing and finishing second in the mile and a quarter Jockey Club Gold Cup (G1) and will have John Velazquez aboard from post position eight.

Also in the field at morning line odds of 8-1 is Lea for trainer Bill Mott. Originally slated for the Breeders’ Cup Mile (G1) on turf, the decision was made earlier in the week to instead race on the dirt. The six-year-old son of First Samurai is a seven-time career winner and has been on the board in five of his six starts this year. Jose Lezcano will be aboard for the first time and they will break from post position five.