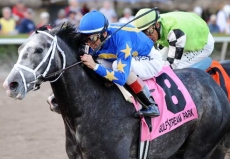 On Saturday at Saratoga, the featured race is the $600,000 Woodward Stakes. A Grade 1 race carded at a mile and an eighth on the main track, the field as been set at eight colts and geldings.

Liam’s Map has been installed as the heavy favorite on the morning line at odds of 6-5 and is one of four horses in the race for trainer Todd Pletcher. A four-year-old son of Unbridled’s Song, he has won four of his six starts and stepped up to graded stakes competition for the first time in his most recent start in the Whitney (G1). He finished second to Honor Code after setting the pace. John Velazquez will remain aboard and they will break from post position two.

Effinex trying for fourth victory of the year

Second choice at 4-1 on the morning line is Effinex for trainer James Jerkens. A four-year-old son of Mineshaft, he has won six of his sixteen starts and has won three of his four starts this year. He rebounded after being eased in the Brooklyn Invitational (G2) to win the Suburban Handicap (G2) last time out. Junior Alvarado will be in the irons and they will break from post position seven.

Also in the field at morning line odds of 5-1 is Wicked Strong who also comes out of the Jerkens barn. A four-year-old son of Hard Spun owned in partnership by Centennial Farms, he has won three of his sixteen starts and has gone winless since winning the Jim Dandy (G2) as a sophomore. He was fourth in the Whitney (G1) last time out and will break from the rail under Luis Saez.