Lea Back in Action in $500,000 Stephen Foster Handicap 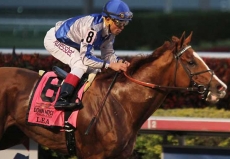 On Saturday at Churchill Downs, the featured race is the 34th edition of the $500,000 Stephen Foster Handicap. A Grade 1, the mile and an eighth contest has drawn a field of seven colts and geldings.

Lea headlines the field as the morning line favorite at 7-5 for trainer Bill Mott. A multiple Grade 1 winner, the six-year-old son of First Samurai will be making his first start since finishing third in the Dubai World Cup (G1) in March. He has won seven of his fifteen total starts and has been training forwardly for his return to the races. Joel Rosario will remain aboard and they will break from post position two.

Hoppertunity sharp with a recent bullet at Churchill

Bob Baffert will saddle Hoppertunity as the second choice at 5-2 odds on the morning line. A four-year-old son of Any Given Saturday, he has been on the board in seven of his nine starts and is a four-time winner. After winning the San Pasqual (G2), he was third behind Shared Belief in the San Antonio (G2) and has been training sharply since then with a recent bullet work. Mike Smith will be in the irons from post five.

Also in the field at morning line odds of 3-1 is Commissioner for trainer Todd Pletcher. A four-year-old son of A.P. Indy bred and owned by WinStar Farm, he has won four of his twelve starts and comes into this race off of back to back graded stakes victories. He was last seen winning the Pimlico Special (G3) as the favorite. Javier Castellano will be aboard and they are scheduled to break from the inside post as he goes for his first Grade 1.