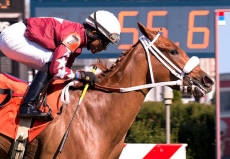 The stakes action will kick off on Saturday at Gulfstream Park with the $75,000 Ladies’ Turf Sprint Stakes. Scheduled to be run at five furlongs on the turf, the stakes race has drawn a field of eight fillies and mares with one other entered for the main-track only.

Of the fillies entered for the turf, Lady Shipman is the heavy favorite at odds of 3-5 and will be making her first start for trainer Kiaran McLaughlin. A four-year-old daughter of Midshipman, she has been on the board in all twelve starts and will be trying to earn her ninth career victory. She has been freshened since finishing second against male rivals in the Breeders’ Cup Turf Sprint (G1) in October and will break from post position two with Irad Ortiz, Jr. aboard.

Second choice at morning line odds of 6-1 is Katie’s Kiss for trainer David Fawkes. A four-year-old daughter of Kantharos, she has won four of her fifteen starts and will be trying to earn the second black type win of her career. She was last seen finishing sixth in the Sunshine Millions Turf Sprint and will try to rebound in her second start of the year. Tyler Gaffalione will be aboard and they will break from the outside post.

Also in the field at morning line odds of 8-1 is Aquinnah for trainer Jane Cibelli. An eight-year-old daughter of City Place, the veteran mare is a thirteen time winner and earned the first stakes win of her career last spring at Gulfstream Park. She has been off the board in her last two starts against stakes competition and was most recently fourth in the Windley Key Stakes. Paco Lopez will be aboard from post position six.