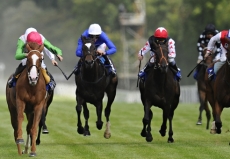 On Sunday, the featured race at Santa Anita is the $75,000 Astra Stakes. Scheduled to be run at a mile and a half on the turf, the race has drawn a field of nine fillies and mares.

Lady Pimpernel (GB) tops the field as the morning line favorite at odds of 9-5 for trainer Carla Gaines. After racing primarily in her native Great Britain, the five-year-old daughter of Sir Percy (GB ) made her stateside debut in November with a third-place finish in the Red Carpet Handicap (G3) at Del Mar. She followed that up with a game victory as the favorite in the Robert J. Frankel (G3) last time out and has won a total of five of her sixteen starts. Victor Espinoza will be aboard from post position seven.

Graham Motion will saddle Kitten’s Point, the second choice on the morning line at odds of 5-2. Bred and owned by George Strawbridge, Jr.’s Augustin Stable, the five-year-old daughter of Kitten’s Joy has won three of her eleven starts and has a Grade 3 victory to her credit. She was last seen finishing eighth as the favorite against stakes company at Del Mar and has been training forwardly since that race. Flavien Prat will be in the irons for the first time from post position two.

Lady of Gold aiming to return to winning form

In addition to Kitten’s Point, Graham Motion also will send out Lady of Gold, set at morning line odds of 3-1 in search of her first stakes win. A five-year-old daughter of Medaglia d’Oro, she has gone winless since December of 2013 and hit the board in four of her seven starts last year. She was fourth last time out in the Robert J. Frankel (G3) and was beaten only half a length. Kent Desormeaux, aboard for her last two races, has retained the mount and they will break from post five.