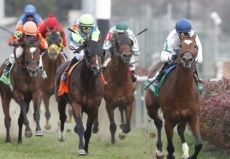 On Saturday at Belmont Park, the featured race is the $200,000 Athenia Stakes. A Grade 3 event for fillies and mares, the race has been carded at a mile and a sixteenth on the turf and has drawn a field of thirteen.

Lady Lara (IRE) has been installed as the morning line favorite in the competitive field at odds of 3-1 for trainer Bill Mott. A four-year-old daughter of Excellent Art (GB), she has been on the board in eleven of her twenty starts and is a four-time winner. She has one win from five outings this year and was last seen finishing second in the Nobel Damsel Stakes (G3) at Belmont Park. Junior Alvarado will be in the irons and they will break from the outside post.

Second choice at odds of 7-2 on the morning line is Coffee Clique for trainer Brian Lynch. A five-year-old daughter of Medaglia d’Oro, she has won seven of her seventeen starts and is a multiple graded stakes winner. She has one win from six starts this year and is trying to rebound after two average efforts in her most recent starts against graded stakes company. Luis Saez will be aboard and they will break from post position ten.

Stellar Path (FR) looms as a threat from the rail

Also in the field at morning line odds of 8-1 is Stellar Path (FR) for trainer Christophe Clement. A four-year-old daughter of Astronomer Royal, the gray filly has won six of her seventeen starts and is trying to earn the first domestic graded stakes victory of her career after winning a Group 3 event in France. She was second in a minor stakes race at Woodbine last time out and is scheduled to break from the rail under jockey Joel Rosario.