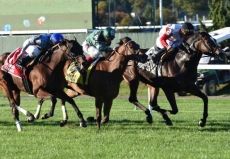 On Monday at Santa Anita, the featured race on the holiday card is the $200,000 Buena Vista Stakes. The Grade 2 race, carded at one mile on the turf, has drawn a field of seven fillies and mares.

La Tia has been tabbed as the favorite at odds of 5-2 on the morning line for trainer Armando De la Cerda. A ten-time career winner, the dark bay daughter of City Place was last seen winning the Matriarch (G1) at Del Mar in November and has been training steadily since then. Joel Rosario will be back aboard and they are scheduled to break from the rail as she tries to earn back to back stakes wins.

Annecdote (GB) trying to rebound after last start at Belmont

Second choice at 3-1 on the morning line is Annecdote (GB) who will be making her first start on the West Coast after a fifth-place finish in the Athenia Stakes (G3). A bay daughter of Lucky Story, she began her career in her native Great Britain before making her stateside debut  for trainer Christophe Clement a winning one in the Nobel Damsel (G3) in September. Victor Espinoza will be aboard from post six.

Also in the field at morning line odds of 3-1 is Diversy Harbor for trainer Tom Proctor. A four-year-old daughter of Curlin, the bay filly is trying to earn the first graded stakes victory of her career and was last seen finishing second in the Robert J. Frankel (G3) in December. Gary Stevens, who recently celebrated his 5,000 win milestone, will be aboard from post position three.