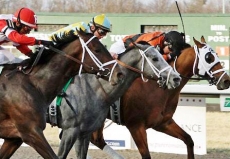 Royal Son is the lukewarm 7/2 choice for trainer Todd Pletcher after making his Polytrack debut with aplomb, winning the John Battaglia Memorial Stakes in gate-to-wire fashion February 28 at Turfway.  It was the second victory in five career starts for the son of Tiznow who ran seventh in the Sam F. Davis in his only other stakes try.  Winning jockey Rodney Prescott will be aboard Royal Son with the pair set to break from the rail.

Imperia (4/1) disappointed in his last start, returning from nearly a three month layoff to finish fifth as the favorite in the Grade 2 Risen Star Stakes at Fair Grounds.  Prior to that effort, the son of Medaglia d’Oro finished second in the Grade 2 Kentucky Jockey Club Stakes at Churchill Downs and won the Grade 3 Pilgrim Stakes on turf at Belmont as a juvenile.  The Kiaran McLaughlin trainee has never raced on Polytrack, but his strong turf form suggests his ability to handle the surface favorably.  Joel Rosario will take the mount breaking from post six.

4/1 co-second choice Meta Boss won the Grade 3 El Camino Real Derby at Golden Gate Fields in his last start and has shown an affinity for synthetic surfaces so far in his brief career.  Jockey Alex Solis will be aboard breaking from post 11.