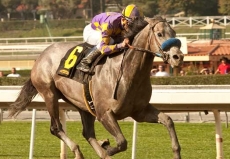 On Saturday at Santa Anita, the graded stakes action will continue with the $300,000 San Carlos Stakes. Scheduled to be run at seven furlongs on the main track, the Grade 2 sprint has drawn a field of eight colts and geldings.

Kobe’s Back headlines the field as the morning line favorite at odds of 2-1 for trainer Peter Eurton. A gray son of Flatter, the five-year-old has been on the board in nine of his seventeen starts and will be trying to earn his fifth career victory. Last time out, in his first start since finishing seventh in the Breeders’ Cup Sprint (G1), he won the Palos Verdes Stakes (G2) with a well-timed ride by Gary Stevens. Stevens will be back aboard and they will break from the outside post.

Second choice at morning line odds of 5-2 is Calculator for trainer Peter Miller. A four-year-old son of In Summation, he has won five of his six starts and was a graded stakes winner early in his three-year-old campaign. He went to the sidelines following a win in the Sham Stakes (G3) last year and returned off of a thirteen-month layoff to win an allowance race last time out. Flavien Prat will be aboard and they will break from the rail.

Also in the field at morning line odds of 6-1 is San Onofre for trainer Karen Headley. A six-year-old son of Surf Cat, the California-bred gelding has won five of his eleven starts and earned his first graded stakes victory two starts back in the Midnight Lute Stakes (G3). He is trying to rebound after finishing fourth in a state-bred stakes race last time out and will break from post position four with Edwin Maldonado in the irons.