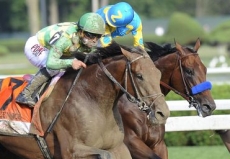 On Saturday at Gulfstream Park, the featured race is the $500,000 Donn Handicap. A Grade 1 event, the race will be held at a mile and an eighth on the main track and has drawn a field of eight colts and geldings.

Keen Ice tops the competitive field as the morning line favorite at odds of 5-2 for trainer Dale Romans. Owned by Donegal Racing, the four-year-old son of Curlin has won two of his thirteen starts. As a three-year-old, his lone win came in the Travers Stakes (G1) where he handed Triple Crown champion American Pharoah his only defeat of the year. Keen Ice was last seen finishing fourth in the Clark Handicap (G1) and has been training forwardly since that race. Javier Castellano will be aboard from post position six.

Mshawish looking for Grade 1 on dirt

Second choice at morning line odds of 7-2 is the versatile Mshawish, one of three horses in the race for trainer Todd Pletcher. A six-year-old son of Medaglia d’Oro, he is a seven-time winner and last year was a Grade 1 winner on the turf. He switched to the dirt two starts back and won the Hal’s Hope Stakes (G3) last time out. John Velazquez will be in the irons and they will break from post position three.

Also in the field at morning line odds of 6-1 is Valid for trainer Marcus Vitali. A six-year-old son of Medaglia d’Oro, he is an eleven-time winner and is based at Gulfstream Park. He was second behind Mshawish last time out in the Hal’s Hope Stakes (G3) but won the Harlan’s Holiday Stakes two starts back to close out his 2015 season. Nik Juarez will be aboard and they will break from post position four.