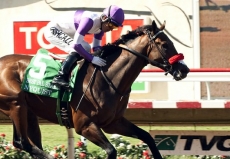 On Monday at Santa Anita, the featured race is the $200,000 San Vicente Stakes. While it does not offer points towards the Kentucky Derby, the Grade 2 event will be held at seven furlongs and has drawn a field of six colts and geldings.

The race will mark the return to the races for the undefeated Nyquist for trainer Doug O’Neill. A bay colt from the first crop of champion Uncle Mo, he capped off a perfect season in October with his fifth straight victory in the Breeders’ Cup Juvenile (G1) which cemented the Eclipse Award for Champion Two-Year-Old.  He has been training steadily for his sophomore debut and will break from the rail under jockey Mario Gutierrez.

Exaggerator rested off of win in the Delta Jackpot

Second choice at morning line odds of 5-2 is Exaggerator for trainer Keith Desormeaux. A dark bay son of Curlin, he was purchased for $110,000 as a yearling and has won three of his six starts. A multiple graded stakes winner, he closed out his juvenile year with a victory in the Delta Jackpot Stakes (G3) at Delta Downs. He has been training well since then and will have Kent Desormeaux aboard from post position five.

Also in the field at morning line odds of 5-1 is Sheikh of Sheikhs for trainer Wesley Ward. A bay son of Discreetly Mine, he was purchased for $330,000 as a two-year-old and has been on the board in three of his four starts. He will be trying to earn his first graded stakes victory and is coming out of a third-place finish in the Hutcheson Stakes (G3) at Gulfstream Park. Rafael Bejarano will be aboard and they will break from the outside post.