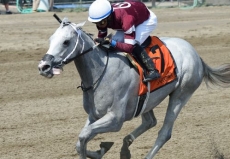 On Saturday at Churchill Downs, the track will host the $200,000 Pocahontas Stakes. Restricted to two-year-old fillies, the Grade 2 event will be contested at a mile and a sixteenth and will earn the winner an automatic berth into the Breeders’ Cup Juvenile Fillies (G1).

Just Wicked tops the field of eight fillies as the overwhelming even-money favorite for trainer Steve Asmussen. Bred and owned by Winchell Thoroughbreds, the gray daughter of Tapit has won two of her three starts and earned the first stakes victory of her career with a strong win in the Adirondack Stakes (G2) at Saratoga. Jose Ortiz will be aboard and they are scheduled to break from post position seven.

Second choice at odds of 9-2 on the morning line is Dothraki Queen for trainer Ken McPeek. Purchased for a modest sum of $35,000, she is stepping up in class after breaking her maiden by seven lengths in her career debut at Ellis Park last time out. She will get a jockey change to Corey Lanerie and they will break from post position five for her first start against stakes company.

Also in the field at morning line odds of 6-1 is Decked Out for trainer Keith Desormeaux. A chestnut daughter of Street Boss, she has been on the board in three of her four starts and will be trying to earn her first black type victory. She was fourth in the Adirondack Stakes (G2) last time out. Colby Hernandez will be in the irons and they will break from the inside post.