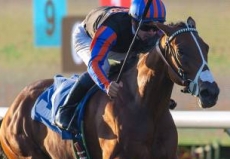 On Saturday at Santa Anita, the featured race is the $100,000 Surfer Girl Stakes. Restricted to two-year-old fillies, the one mile turf race has drawn a wide open field of eleven.

Jakaby Jade (GB) tops the field of juveniles as the morning line favorite at odds of 3-1 for trainer Doug O’Neill. A bay daughter of Royal Applause (GB), she began her career in her native country before making her North American debut in September. She earned her second straight career victory and won the Del Mar Juvenile Fillies Turf Stakes in a minor upset at Del Mar. Rafael Bejarano will be aboard replacing an injured Flavien Prat and they will break from post position five.

Second choice at morning line odds of 7-2 is Lucky Folie for trainer Richard Mandella. A chestnut daughter of Distorted Humor, she is out of a graded stakes placed mare and will be stepping up to stakes company for the first time. She broke her maiden at first asking in her debut on the main track and will also be trying the turf. Gary Stevens will be in the irons and they are scheduled to break from post position seven.

Also in the field at morning line odds of 12-1 is longshot Optimism and Hope (IRE) for trainer Philip D’Amato. A bay daughter of Holy Roman Emperor (IRE), she has one victory from three starts and will be trying for her first black type win. She is trying to rebound after finishing sixth in the Del Mar Juvenile Fillies Turf Stakes in her North American debut. Mike Smith will be aboard and they will break from the outside post.