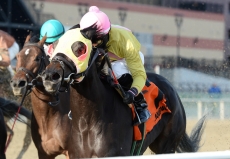 On Saturday, the featured race at Aqueduct is the $100,000 Broadway Stakes. Restricted to fillies and mares bred in New York, the six-furlong contest has attracted a field of seven.

Bill Mott will saddle the favorite, Isabelle, at odds of 5-2 on the morning line. A four-year-old daughter of Successful Appeal, she has won four of her seven career starts and is going for the second stakes win of her career. She comes into this race off of back to back victories against optional claiming competition at Aqueduct and won her yearly debut last out as the favorite. Junior Alvarado will be aboard and they will break from post position four.

Second choice at 3-1 on the morning line is Blithely for trainer Mark Hennig. A four-year-old daughter of Exchange Rate, she will be making her stakes debut and has won half of her eight starts. She has one win from two starts this year and was last seen finishing third behind Isabelle in January at Aqueduct. She will get a jockey change to Manuel Franco and they are scheduled to break from the inside post.

Vicki's Dancer trying to rebound back in New York

Also in the field at morning line odds of 5-1 is Vicki’s Dancer for trainer Rudy Rodriguez. A six-year-old daughter of Disco Rico, the bay mare is a multiple state-bred stakes winner and has six wins over the course of her career. She was last seen finishing fifth against open company in the What a Summer Stakes at Laurel and will have Angel Arroyo in the irons from post position six.