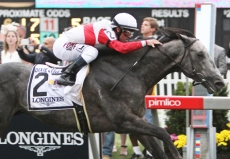 On Monday at Saratoga, the stakes action will kick off with the $250,000 Bernard Baruch Handicap. A Grade 2 event carded at a mile and a sixteenth on the turf, the race has drawn a field of seven colts and geldings.

Ironicus has been tabbed as the morning line favorite in the wide open field at odds of 9-5 for trainer Claude McGaughey, III. A gray son of Distorted Humor, the four-year-old colt is a homebred for Stuart Janney, III and has been on the board in nine of his ten starts. He won his first graded stakes race three starts back in the Dixie Stakes (G2) and was last seen finishing second in the Fourstardave Handicap (G2). Javier Castellano will be aboard from the rail.

Constitution switching to turf for the first time

Second choice at 2-1 on the morning line is Constitution who is one of three starters for trainer Todd Pletcher. A four-year-old son of Tapit, he has won four of his six starts and will be trying the turf for the first time. He has been on the shelf since winning the Donn Handicap (G1) in February at Gulfstream Park and will have Joel Rosario in the irons from post position two.

Under Control (BRZ) stepping up after minor win

Also in the field and a long shot at morning line odds of 12-1 is Under Control (BRZ) for trainer Graham Motion. A seven-year-old gelded son of Northern Afleet, he has been on the board in fifteen of his nineteen outings and is a five-time winner. He won the Lure Stakes last time out and will be trying to earn the first graded stakes win of his career. Irad Ortiz, Jr. will be aboard from post four.