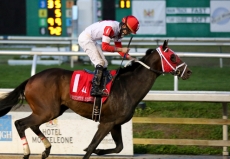 The first of six stakes races on the card Saturday, February 20 at Fair Grounds, the Grade 3, $125,000 Mineshaft features a small field with five veteran rivals set to contest the mile and one sixteenth event on the main track.

All signs point to 8/5 morning line favorite International Star who once again figures to be very difficult to beat after returning from a layoff to win the Louisiana Stakes January 16 in impressive fashion. The victory was the four year-old Mike Maker trainee’s fourth win at Fair Grounds in as many starts, having swept the three year-old Kentucky Derby prep series in 2015 winning the Grade 3 LeComte, Grade 2 Risen Star, and Grade 2 Louisiana Derby in succession while accumulating more qualifying points than any other three year-old. International Star ended up scratching from last year’s Kentucky Derby with an injury and did not return until November. The four year-old appears to be back in top form Maker connects with 24% of his starters making their second start off layoffs of 45-180 days.

Eagle gets rematch with International Star

Eagle (2/1) made a winning move for all intents and purposes in the Louisiana, but was not good enough to hold off International Star. The Neil Howard trainee might not have as high a ceiling as his main rival, but should once again be in the thick of things turning for home. If the top choice does not fire, Eagle is a very logical win contender.

West Coast shipper could be live

Point Piper (3/1) ships in from California for trainer Jerry Hollendorfer after finishing sixth last out in the Grade 2 San Pasqual January 9 at Santa Anita. The six year-old has posted Beyer Speed Figures good enough to win this if he is able to adapt to the Fairgrounds footing. Julien Leparoux will ride breaking from post 2.